The Most Awkward Christmas Photo Ever 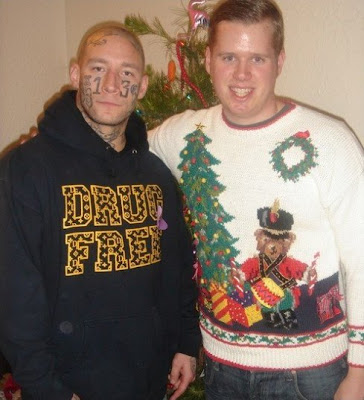 These two polar opposites have blessed this holiday season with the most awkward picture ever. The dweeb on the right is sporting the typical tacky Christmas sweater complete with teddy bear and a good dose of pizza chin. The recovering meth/smack head on the left appears to also be a former MS-13 member. I say former because for one, he’s not in prison, and two, Mara Salvatrucha is harcore to the bone and would never tolerate this soft pose. MS-13 is comprised of Central American gangsters that have spread from L.A. across North America. Salvadorans, Guatemalans, and Hondurans, banded together against Mexican and Black gangs in the 1980’s and became leaders in the smuggling of drugs, guns and people across the border. Lately the Feds have responded with ICE raids and MS-13 has responded in kind. This photo is in the spirit of AwkwardFamilyPhotos.com, but takes the lameness to another level.
at
1:13 PM