As we enter this fall’s presidential race, there is an unfortunate likelihood that we will encounter prejudice from some. However, the prejudice will not be as one-sided as one would imagine. Certainly Obama’s status as the first legitimate African-American contender places him at the center of a bigot’s ire, but his counterpart will experience his own form of -ism. John McCain is running for the most demanding job in the world at age 71. Only two other presidents have been elected in the latter half of their 60’s. Ronald Reagan, was 69 when he took the office, and William Henry Harrison, a sprite 68 in 1841. While Obama will likely see most of his prejudice in subtle terms, McCain faces a potentially vociferous bias. Part of the reason is constitutional, in 1976 the Supreme Court ruled in Massachusetts Board of Retirement v. Murgia, that age discrimination does not amount to a suspect class. This meant that ageism did not deserve the same strict protections under the Equal Protection clause that race, religion and national orgin did. Part of this seems unfair, one should not be disadvantaged or treated unfairly for something they have no control over. However, there is a reality to aging, none can deny that facilities fade as time passes by. Much of the ageism directed at McCain is largely cruel and unwarranted. Everyone ages differently, McCain had 6 years of his life stolen from him and seems to show no sign of slowing down. It is blissful ignorance to hope this election season will feature little noise about age bias, perhaps it would be helpful to remember the vices of a particularly young ex-president. Bill Clinton was a ruby cheeked 46 when he took the office, and we all know he wasn’t done sowing his wild oats. 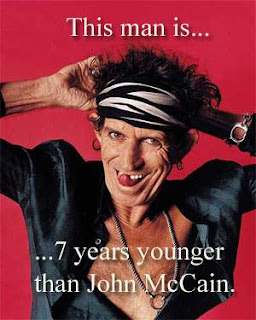 I will set aside my personal beliefs that John McCain is the ultimate fraud politician with zero convictions aside from wanting to start constant wars in every country.

( Google his stance on the 90’s Serbia conflict, how many Americans would have died with him calling the shots?)

I watched the dude barely be able to walk down a flight of steps and thought to myself, this is the guy we need in 2008 to restore our country in the world?

His age would not be a big deal to me if he repeatedly was able to grasp simple ideas as the difference between a Sunni and Shia and the correct Troop levels in Iraq. His supposed national security strength. what a joke!

With the media so focused on the Obama/HRC race and their love of all things Maverick, McCain has got a free pass but he says so many crazy things on the stump, it is only a matter of time before he says really,really dumb that blows up to make his age a big issue.