Taking Pictures of Yourself in the Mirror? 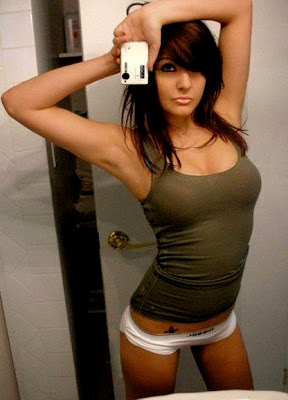 The practice of taking pictures of yourself in the mirror is another of the World Wide Woes documented lately by STiB. Tracing the exact history of this phenomena is hard to pin down, but it’s certainly of recent vintage. The first commercially available camera was Eastman’s Kodak camera in 1888. For years pictures were to be taken with great care; film was expensive, and the development process took time. By 1999 Nikon introduced the first commercially available digital camera, but its $6,000 price tag kept many would be posers at bay. As the price dropped in the coming years, the affordable digital camera and the launch of MySpace in August of 2003, formed the perfect storm of self shot over-exposure. Most self shots can be broken down into 1 of 2 categories; the outstretched arm angle shot, or the mirror shot. The double outstretched arm self shot is a third, but less used variation. Shots are often accompanied by the pouty face, a staple of the Jersey Shore set. The Jersey pout can be found in both the outstretched arm shots and the mirror shots. Recently the self shot has taken a disturbing turn. Once dominated by the ladies, sadly men have decided to advertise their wares in the same manner.

Over the last two years the Web has delivered such self shot gems as Rihanna and Vanessa Hudgens. Lately though, the celebrity self shots have been male athletes. First came Jeff Reed, and Santonio Holmes of the NFL’s Pittsburgh Steelers, to be followed by Grady Sizemore of the MLB’s Cleveland Indians. This week similarly revealing self shots of 2007 NBA #1 Pick Greg Oden found their way to the Web. This slew of self pics only confirmed what Facebookers have been saying, it’s time for the self pics to go. Once the domain of hotties with the confidence to show their goods to the world; the privacy erosion in our digital world has led every Jack and Jill to believe they need to posts pics for all to see. Most keep their MySpace and Facebook pages stocked with more modest selections and “sext” their nude shots to current paramours. Realizing your nude pictures have just been released to cyberspace must be frightening, and hopefully that fear will provide the deterrent that will stop this world wide woe.

SCCHHEEEEECCCHH To a Motherfucking Halt

HIS NAME IS SANANTONIO FUCKING HOLMES??!?