Taurean Charles, Year of the Bull

Year of the Bull, released in 2003, is a compelling documentary following the senior season of Taurean Charles at Miami Northwestern High School. Set in Liberty City, the story reveals a tale of a talented young man facing compelling odds. Taurean lost his father to a heart attack before his teenage years and, while he does have a supportive home, his teachers and coaches often negatively reinforce poor habits. He is allowed to flail in a troubled school setting; failing the SAT several times. His coaches, the only male figures in his life, repeatedly rile his fragile teenage emotions, while providing poor examples of leadership. The film ends on a high note as Taurean manages to earn himself a scholarship to Florida in 2003. 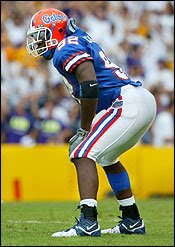 Viewed as a budding star, the dream comes to an end in the summer of 2004. While at an off-campus keg party, Taurean, in a rage of violence, punched a student, threw him off a deck, and then, threw a half keg at him. Taurean maintained his innocence, and was somewhat vindicated when the most serious charges were dropped. However it was too late, Taurean already had an on campus assault charge on his record; dismissed from the team, he enrolls at Bethune-Cookman and manages to salvage his career with a respectable junior season. A lackluster senior campaign left him undrafted, unsigned, and presumably out of football. After viewing the movie and reflecting on his life since, one cannot help but be saddened by the circumstances. This is the not story of a young man bent on destruction and rebellion. It is the story of a high school football player who saw testosterone fueled coaches as male role models, who felt pressures beyond the control of a 17 year old, and who was never taught to channel and control emotions. Many scenes throughout the film give rise to the appearance that his coaches were a win-at-all-costs type. This presumption was vindicated in 2006 when it was revealed coaches, teachers, and the Principal, kept a statutory rape accusation against the star tailback under wraps until after the State championship had been won.

Example is not the main thing in influencing others, it is the only thing.

I believe the correct term would be “Zooked.”