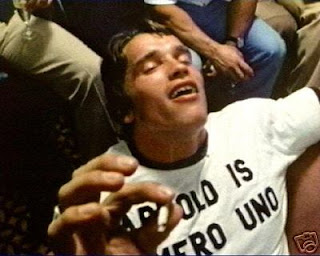 Gay pornography, marijuana, and steroids, not exactly the calling card for many Republicans. Even the Log Cabin Republicans toe the party line and abstain from advocating anything illegal. Even though not advocating, California Governor Arnold Schwarzenegger’s past dabbles in all three raise questions about the values of the Republican Party. The charges of gay porn and reefer are slightly overblown, but not without merit. Struggling in the late 70’s to break into the entertainment industry, Arnold posed nude for gay magazine “After Dark.” Hardly a crime in itself, it nonetheless rankles to know a man who once titillated gays, now works for a Party that condemns the lifestyle. To his credit, Arnold fesses up to inhaling, and oddly seems to working against the conservative mantra of “Just say No.” Past indiscretions aside, it’s his use of the juice to propel himself to international stardom that should concern one the most. In 1968 a young Arnold reached America with one goal in mind, becoming Mr. Olympia. After winning 6 titles, Arnold retired as an icon. Achieving the pinnacle of the bodybuilding world, Arnold would use this as a springboard for a future career in acting. As we all know, acting went well for Arnold, so well, he parlayed his notoriety into a successful political career. In hindsight, one realizes Arnold, facing long odds as an immigrant, surely would not have achieved such astounding success without his bodybuilding victories. Given his admission of steroid use, Arnold’s achievements seem tainted. Worse than a ballplayer who uses ‘roids to improve, Arnold’s career would not have existed without outside help. It is sadly ironic that the Mitchell Report, commissioned to clean up baseball, failed to mention the poster child for early performance enhancing drugs. The Republican Party, long on morals and short on memory, apparently failed to make the connection between Arnold’s career path and it’s own identity. Arnold even violated a few immigration laws, another source of G.O.P. stiffness. Given the irony of these facts, try and hold your breath when the Obama drug use attack ads begin to spin.
at
12:01 AM