With last week’s release of the five 2009 Heisman Trophy finalists the field is set for the weirdest finish in college football history. Since it’s inception in 1935 the winners have been exclusively from the offensive side of the ball with Charles Woodson as the only exception in 1997. More specifically the running backs and quarterbacks have each had periods of domination. From 1972 to 1983 the trophy went to running backs and quarterbacks have won 9 of 10 times since 2000. 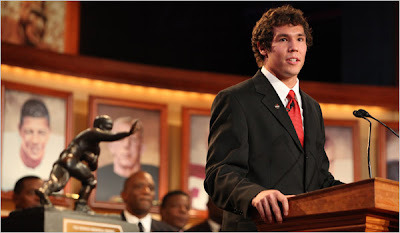 2009 is the weirdest field of Heisman finalists in recent memory for many reasons. Last August when the hype machine cranked up, a holy triumvirante of quarterbacks were everyone’s Heisman favorites. Each led a pre-season top 5 team and two were former winners, unprecedented in the age of NFL millions. Last year’s winner Bradford was the first to take a bow, an injured shoulder in the opening game followed by a re-injury to end the season. Despite statistically weaker years, Colt McCoy and Tim Tebow remained on the Heisman radar thanks to leading undefeated squads into December. Of the two, Tebow’s candidacy was the weaker following unimpressive play in the SEC Championship game loss. McCoy’s chances remain viable, but only due to a lucky 1 second being put back on the clock to save the Big 12 Championship. Both made the list of finalists, but the way in which they did makes their appearances odd. Tebow almost certainly won’t win and has to face the world after his tearful exit last week. McCoy is still a viable winner, but his slow start to the season and rocky end makes his chances slim. Each candidacy is buoyed by exposure and little else, Tebow the former winner, McCoy the standout QB on an undefeated team. The rest of the 2009 field is downright odd. 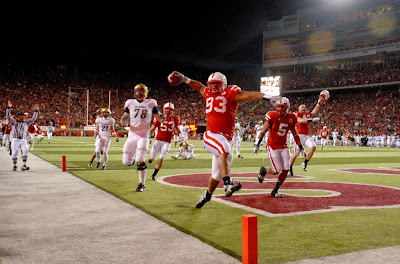 Ndamukong Suh of Nebraska is the most unlikely candidate of all. Defensive tackle is normally occupied by beefy men that take on blockers and clog running lanes. Not exactly the stuff of Heisman moments. Suh been dominating racking up middle linebacker numbers. His performance in the Big 12 Championship games propelled him into the legitimate discussion and forced voters to take notice* When put in the context of what other defensive lines have produced in terms of tackles, sacks, and passes blocked Suh’s dominance is stunning. 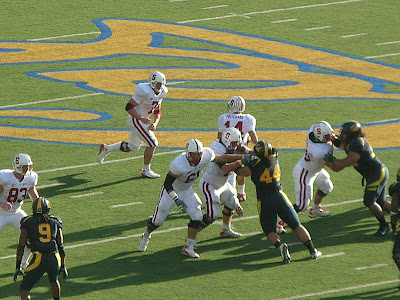 The idea of Toby Gerhart as a Heisman winner last August was a pipe dream held in Palo Alto only. After leading Stanford to their first bowl game in 8 years Gerhart made his splash in big wins over USC and Notre Dame. With 1700 yards and 26 touchdowns the invitation has been earned, but that’s not what makes it odd. While it might not be nice to talk about but Gerhart is a Caucasian tailback, something not seen as a Heisman winner since John Cappelletti in 1973. Seventeen running backs have won the prize since 1973 and all of them have been African-American. 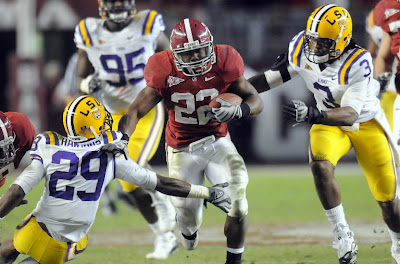 Mark Ingram by all means appears to be a traditional candidate. He is the leading rusher on the top ranked team in the country. In big games he has shined and is the projected favorite. What makes Ingram unique is that despite a rich history with 12 National Championships, Alabama has never had a Heisman winner. By comparison, Notre Dame, USC, and Ohio State have 6 Heisman trophies a piece. Although Suh is this man’s choice as “Most Outstanding College Football Player of the Year,” expect Ingram to take home the doorstop on Saturday night.

* The Heisman voters are comprised of 870 individuals, including all living past winners. The entire registration of voters is not known and makes one wonder how many voters are actually informed. Does Rickey Williams actually mail in his ballot?