As Barack Obama’s nomination seems increasingly likely, one would assume the political tensions that have simmered for so long would take a respite. No chance. The rested and restless Republican Party is now ratcheted up its quadrennial attack on another DNC foe. Despite having endured Team Clinton, Obama now faces the trickier and more powerful foe, the Republican Machine. After two Republican triumphs in each Bush election, the reputation of Karl Rove and his minions for outstanding work was burnished. Surely each election was unique, the GOP needed the Supreme Court’s nod in 2000, and the Swift Boat nastiness in 2004. But in each case, it was the organization and resources of the Republican Party that ultimately deserve the credit for each triumph. Despite the possible balkanization of the Dems after Hillary’s extended attempt, 2008 seems to signal the beginning of a level playing field. The Democratic Party has demonstrated better fundraising, organization, and buzz in the last year, unseen since Bubba caught fire in 1992. 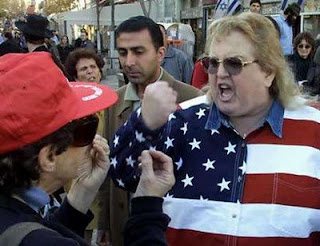 Things are heating up

Though formidable in their own right, and braced for a fight, Obama and his Party face a dangerous opponent. As the Swift Boat Veterans proved, well funded special interest groups can alter the course of a national election. Political science has never been so technical, voting districts and polling numbers can be crunched and analyzed in endless ways. By carefully targeting their message, groups can achieve maximum impact in crucial districts. This tactic was renewed this weekend when South Floridians opened their Thursday papers. As Obama stopped by Palm Beach, Broward, and Dade counties for a 3 day swing, the Republican machine stepped up to the plate. 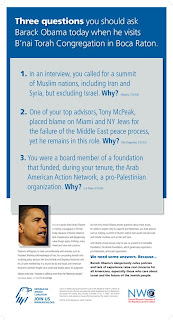 A full page ad by the Republican Jewish Coalition took a strong stance against Obama for his alleged softness for Palestinian plight. The ad goes on to question Obama’s belief in unconditional sit downs with world leaders, friend and foe. With pinpoint precision, the GOP special interests groups have selected an essential target. South Florida is a crucial battleground for Florida’s 25 Electoral College votes. More specifically, it is the home of several groups of voters with unique concerns. Maintaining America’s largest Jewish and Cuban Diasporas, South Florida will undoubtedly influence the course of the next election. Obama’s speech about Cuba and his future plans for the island on Friday will likely go a long way to converting some of the often loyal Cuban GOPists. However, the Jewish population seems to be a tougher audience. Other battlegrounds remain crucial to the outcome of the election, but few feature a trickier, more multinational populace than South Florida. The attacks will get dirty and personal, but this time the Dems won’t get caught with their pants down. More savvy this time, the attacks will fly both ways as the fall draws near. Voters will have to navigate a sea of sharks and jellyfish, hopefully the policy issues stay above the fray, and not disguised by attack ads.

As the Swift Boat Veterans proved, well funded special interest groups can alter the course of a national election.

While adequate funding is, indeed, an important element, you appear to either overlook or discount an even more important one…substance and credibility.

I believe you will find that in election 2008, no amount of $$$ will simply buy the substance and credibility that the Swiftvets brought to the table in 2004.